Are you 18 years old?
CONSUMPTION OF ALCOHOL HAS A NEGATIVE IMPACT. IT IS PROHIBITED TO SELL IT, BUY IT AND PASS IT ON TO MINORS.

The gathering of various plants growing in the wild can be considered as the prehistory of beer brewing. Ancient Egyptians believed that all of the rights to brew beer from hops and invent the drink itself belonged to the god Osiris. It was also him who handed over the art of making barley malt to the people. There are fragments of a brewery that belonged to the irresistable Nefertiti, preserved until nowadays. The murals on the walls depict the queen pouring beer through a strainer – it was one of the ways to clear the drink from impurities. Such a strainer can be seen at the British Museum.

One of the old recipes that has been preserved until nowadays tells that good barley grain is soaked several times until it turns into “flakes”, which are afterwards dried; bread is made from the barley. After that the yeast is added, the upper layer of the bread is toasted and it is kept in the water further on. The acquired liquid is then strained. Just like onions and bread, beer was included in the main list of foods of the Egyptians.

Three loaves of bread, three containers of beer, a few onions and a few pieces of garlic were consumed per day. An ancient papyrus tells that beer was mixed with wine and honey during feasts in Alexandria. The beer brewing centre of Egypt was a town called Pelusium, which is why beer is sometimes called the “Pelusian drink”. During the rule of the Ptolemaic dynasty a special beer tax was introduced.

As the writings on clay plates from the 3rd century BC show, 300 tonnes of barley were produced in three months at the ruler’s brewery in the city of Lagash. Beer brewing technology is described on ancient Sumer clay plates that are more than 5000 years old.

German archeologist E. Huber has found written evidence (3000 years BC) regarding the preparation of more than 15 different varieties of beer. It is believed that the Sumerians even had a saying “Not to know beer is not to know joy”. The Sumerians and Assyrians knew more than 70 different varieties of beer. The beer was divided into sweet, dark and light varieties. The most popular one was dark beer with sediments and a small amount of alcohol.

Some of the beer varieties were enriched with various herbs that formed a bitter taste. Beer was also used as a trade product. The Sumerians freed the brewers from taking part in crusades. Beer brewing and trade standardisation rules (1792-1750 BC) were established by King Hammurabi.

But in Babylon beer was also brewed by women, which was not allowed before. If the price setting norms were violated, severe punishments followed. Fake beer producers were either drowned or punished by making them drink the fake beer until their death.

Beer was not popular in Ancient Greece, which was rich with various wines. It was considered to be the drink of the poor. However, Hippocrates has dedicated a whole book to beer. Whereas Aristotle wrote about the strange behaviour of people intoxicated by beer – they were falling backwards instead of rocking from side to side like after drinking wine. Although one must remember that the Greeks drank wine that was mixed with a lot of water.

Citizens of Ancient Rome practically did not consume any beer, and it is also characteristic of many modern-day Romanic nations that cultivate grapes. There is evidence provided by Pliny the Elder regarding the production of beer from wheat in Southern Italy. During celebrations beer was consumed in honour of the goddess Ceres, which is why beer is called “Cervisia” in Italy and “Cerveza” in Spain. During the IV century beer was the drink of the poor in Europe.

In India beer was brewed according to African traditional methods. Other crops were used as raw materials. The intoxicating drink was called “sura” in Sanskrit. In East and Southeast Asia rice was already cultivated from the IV millenium BC. After travelling to China (XIII c.) the Venetian traveller Marco Polo noted that the locals were making a drink out of rice and spices, and that it had the same effect as wine. As it is known from Buddhist monk testimonies gathered during later periods of time, they consumed beer just as much as the Europeans. Nowadays the people of Tibet and Nepal produce beer out of barley, but they also use rice and millet.

Beer was also known in pre-Columbus America, where corn was cultivated. The main raw materials for making beer were grain and malt. Usually they were mixed in equal parts, water was poured over them, and they were left to soak for one day. Then they were ground until a dough-like mass formed.

After that boiling water was poured over it and cold water was added – thus the yeast was made. By carrying out a few other preparatory manipulations, the acquired liquid was fermented. After that it was filtered through a sieve of plants. The acquired corn beer could be stored for 15 hours.

Corn beer was brewed according to the local traditional methods, pepper was added to it, and it was called “chicha”. In Brazil, dark (black) beer was made out of roasted grain. This tradition has been preserved in certain areas of the Amazon’s riverhead.

According to the Russian biologist N. Vavilov, the Abyssinian highlands and Northern Africa is the place of origin of wild barley. Strabo, who lived at the beginning of our era, has recorded beer making traditions in Ethiopia. 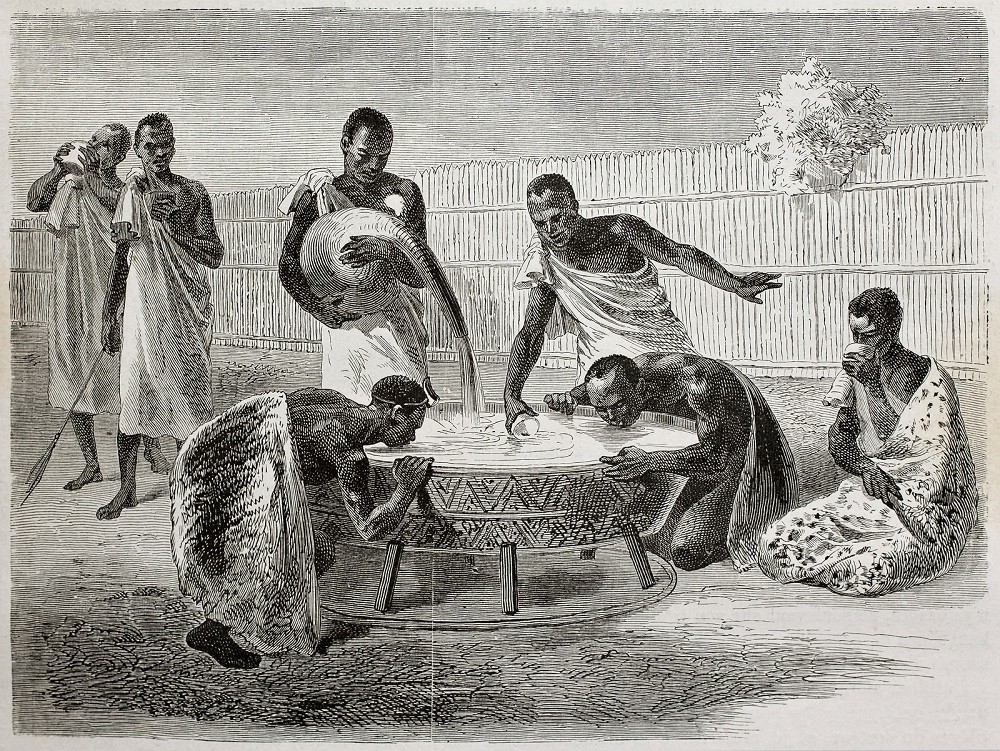 Beer was used during sendoff rituals of the dead. Household items, food and beer was also put into the grave next to the deceased who was placed facing his or her native lands. Ancient Egyptians also did it in a similar manner. All of the guests of the ceremony drank beer and ate goat meat prepared as an offering. Beer was made out of African millet in Sudan, Uganda, and the inhabited areas of the Zambezi and Congo basins, where palm-trees did not grow.

Portuguese navigators (1505–1506) provided information about a drink similar to beer in Mozambique, as well as Southern and Central Africa, where corn was used as a raw material. Much later beer started to be made out of imported sugarcane in the Congo.

Beer was a traditional drink among people who inhabited Europe during the VI and V centuries BC. It was also known by the Celts who were living in the territory of Gaul at that time. During the I century BC, Posidonious indicated that beer was made out of wheat and honey. In Gaul beer was the people’s drink and it was called “sogma”. 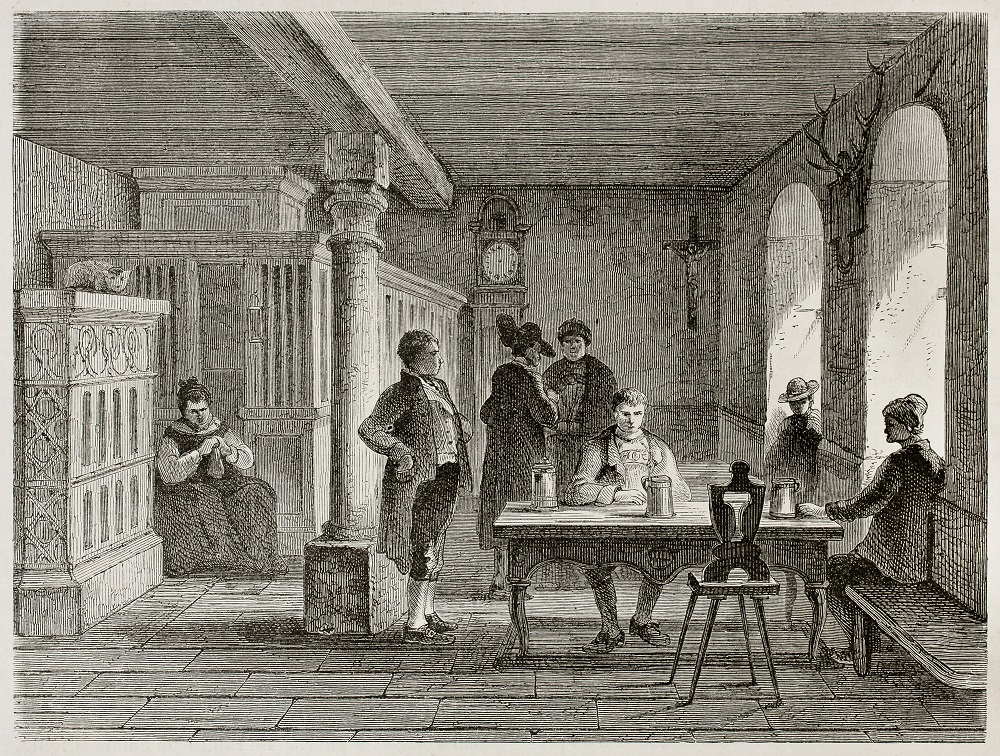 This ancient Celtic beer has been preserved until nowadays in Northern France, Belgium, and England. Ancient Germans also had beer as a national drink. In his work “On the Origin and Situation of the Germanic Peoples”, the Roman historian Tacitus has indicated a drink out of barley and wheat, which is made into something similar to wine through fermentation.

Beer that was made by Germans and Gauls differed with an acidulous taste. Before the great migration to the Roman Empire took place in IV– VII centuries, there were three known methods for brewing beer:

Beer was made by being enriched with oak-tree bark, tree leaves, bitter plant roots and other aromatic plants. Rosemary, sage, laurel fruits etc. were used for this purpose. But the most peculiar thing is that hops were not used in the brewing process at that time. 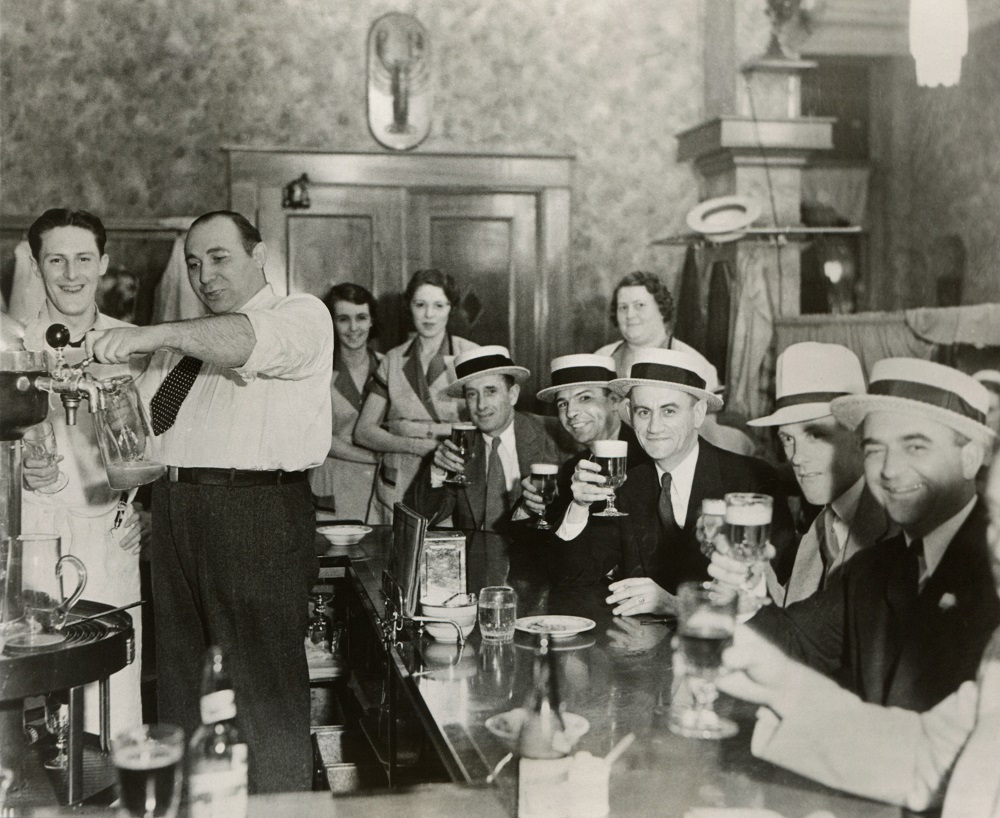